On the Monday of our New York trip the forecast said it’s going to be the hottest day of the week so we decided to head to Central Park. Surprise, surprise, our plan to be at the bike rental store by 9 o’clock in the morning didn’t quite work out. Our alarm went off at 7:30am but we didn’t really leave our hotel room until after 8:15am. We took the subway from Fulton St. Station to the 59th St. station. When we were about to get on, tons of people were actually getting off at Fulton, probably heading into work. The farther north we went the less busy the train became.

While we were on the subway, we also went on the 9/11 memorial site website quickly to take care of the tickets for the next day.

We got off at the 59th St. station, and went searching for our breakfast first. We had picked Bouchon Bakery Café which we found out was just part of the Columbus Circle mall on the third floor.

When we went up the escalator the first thing we saw was a full-service breakfast section, and immediately to the left we found what we were looking for which was the takeout bakery. We ordered croissants for everyone, but somehow Cady ended up with both a croissant and a banana bread which of course she couldn’t finish.  Along with two small milk and two small lattes the bill actually came out to 35 bucks USD. Pricey breakfast for what we had. At least I thought the almond croissant, although if a little cold, was not too bad. Daddy said the chocolate croissant was only so-so.

We packed up quickly after breakfast and went searching for the bike rental store on 6th, which was right beside a Starbucks. After we got everything figured out (was efficient by making payment for the rental on their website while lining up), it was already 10 o’clock. We had our bikes fitted quickly, unlike some of the comments we read online, because it wasn’t that busy, the person there who was servicing the bikes were at least helpful enough to adjust the bikes for us. And when I asked, he even quickly explained how to change the gears.

Off we go to biking

Finally we set off for the Central Park. Daddy was bringing Cady on a tagalong which worked very well. He didn’t need any adjustment time whatsoever to get comfortable. The entire Central Park was one way only. The main path around the park was very wide, with clearly labelled sections for pedestrians, bikes, and the car lane is on the right hand side of the path. What we didn’t know before was that there are red lights that you should stop at for pedestrians to cross the path. As long as you stay on the bike path, we felt completely safe. Not that there were that many cars that passed by us to begin with.

On this hot sunny day in May, there was a breeze pretty much the entire way around the park, and I would say there were shades of some form in at least about a third of the way. So we were kept mostly cool and felt lucky and happy.

When it came to the uphill portions, after adjusting the gear we were able to conquer the gentler slopes. That’s until we came up to the the part after 97th St.. There we encountered a long stretch of uphill that was definitely harder and more challenging. For the next quarter of the ride, I ended up getting off my bike, and walk the bike up a number of times. There was one stretch that was particularly steep, and very conveniently there was a strategically placed cart that was selling cold drinks. We all appreciated the cold peach iced tea that we had. We had several major attraction spots that we already planned to stop at. Other than those we didn’t make too many stops otherwise. When you come to an attraction you want to get to, what you do is either dismount and walk your bike in, or get a lock when you rented the bike and lock your bikes to the bike racks.  Our first stop was the Bethesda Terrace and Fountain. I highly recommend this attraction as the surrounding area was a super nice stopping point. We stopped at the boathouse, parked the bikes, and then walked towards the Fountain. It’s a great resting spot and we took a lot of pictures here. In fact, we discovered the Bethesda Terrace Arcade, which is the arched, interior walkway that links the Mall to Bethesda Fountain and the Central Park Lake.  It is actually a gorgeous backdrop for pictures and we took lots of them.

We also stopped at the Conservatory Water and saw the Alice in the Wonderland statue. In the end we opted not to go to strawberry field because were quite tired by then. On our way back, we made one last stop at the Bow Bridge, took a few pictures and also had a short break under the tree shades. We used up most of the 4-hour bike rental, and had a lot of fun and super good exercise while we were at it. Central Park is a very nice park in the middle of Manhattan. Most people would describe the park as humongous. The benefit of riding a bike around the park is you get to see lots of interesting buildings along the way. Most of them are not high scrapers but older buildings with lots of character to it. Of course you will also see lots of trees and greenery, but in this regard it is not that different from the green space at home. 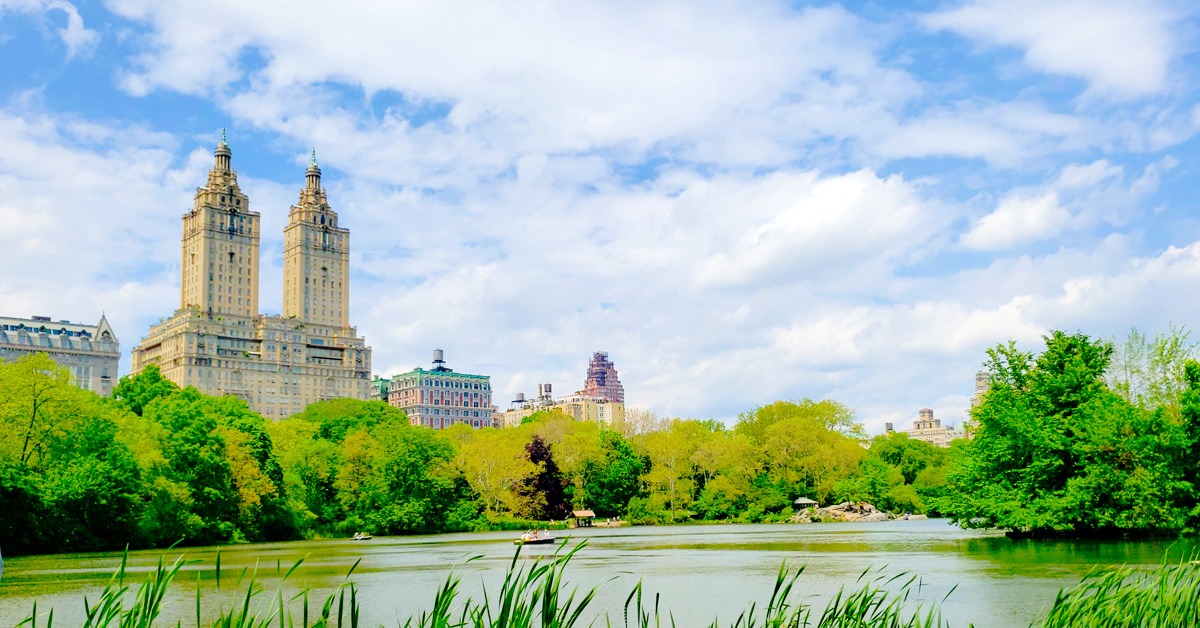 Nolan thought the park was huge and you could barely feel that you were in the middle of New York City anymore.