Time flies and it’s already day 4 of our NYC trip! On this Wednesday morning because the weather was going to be quite decent, we were considering either going to Brooklyn for the day or to the Met Museum. Even when we were talking through the options, in the back of my mind I’m still wondering if there’s a chance we can get in to see the the Harry Potter Broadway play sometime this week. In fact today’s matinee show at 2pm represents a good time slot for us. So I decided the family should go to the box office first when it opens at 10am. We will find out whether we can make something work at all, before heading to the Met Museum. Once again, we ended up not leaving our hotel until 10am. But luck was on our side; when we got to the box office, there was no lineup at all. The box office is located at the Lyric Theatre, and the box office staff was quite nice.  He looked up the different prices and said he found some tickets at $69.50 per part for today. What that means is those tickets have Part 1 starting at 2pm today (Wednesday), followed by the 7pm show for Part 2 in the evening on the same day. We wondered if that is just too exhausting for us, in particular for Cady. Each part is 2.5 to 3 hours long. But those tickets cannot be split up. We actually walked away, crossed the street to check out the Aladdin/Lion King and Frozen box offices. I went up and just asked the staff what’s the cheapest tickets we would be looking at for this week for ANY show, and he told me it will be $80 per ticket somewhere up in the balcony. What I didn’t mention is those Harry Potter $69.50 tickets are actually somewhere in the center of the orchestra and are super good seats. So we thought about it long and hard made our way back across the street, back to the Harry Potter ticket office and grabbed those four seats before they were gone. It was an ouch moment for us as the total damage was US$560, but a point to note is there are no ticketmaster or other admin fees when you buy direct from the box office! When we were debating whether to buy those tickets, Nolan originally said it may not be worth it to spend all that money to see this show. But after we finally paid for the tickets, Howard noted that Nolan noticeably beamed up. So the schedule for the day just changed drastically. We’re not going anywhere else anymore. Then I asked Nolan to give us the background story about the screenplay, as Nolan is an avid Harry Potter reader. He’s read the entire series of books at this point. Howard and I have only watched a couple Harry Potter movies and Cady had no previous exposure to anything Harry Potter at all. (Cady has since then really gotten into the story and has read more than half of the series.) Nolan told us a little bit of the background while we were walking towards Times Square, which was just a couple blocks away. Because of the sudden change in plans, we now had a couple hours to kill, so it made a lot of sense to spend that around Times Square. On our way to Times Square we saw a Junior’s restaurant. Glancing at the menu we figured this is where we will have dinner tonight, but they didn’t take reservation. At a minimum we settled on the dinner choice for tonight and did not have to scramble to find an option in between the 2 acts. Next we stopped at the famous Times Square intersection that everyone recognizes, walked around taking a bunch of pictures and generally had fun just doing people watching. At the intersection of 7th and W 45th, we found a store called Line Friends that sells cute Korean characters. Its big signage did a good job of bringing us into the store, even though we had never heard of these characters before. We are welcomed with a gigantic brown bear at the entrance. Later on we found out what we called it wasn’t far off. This bear’s name is “Brown.” Of course with vast selection of plush toys and accessories, Cady ending up picking out her souvenir from this New York trip from this store. A new white bunny plush toy was added to her collection of stuffies at home. We grabbed a quick bite for lunch and headed back to the Lyric Theatre full of anticipation. We were glad that we arrived with a little bit of time to spare, because there are quite a few activities to check out in the lobby waiting area before the show started. There are 2 levels to this lobby that we could see, with staircases leading up to the balcony. Activities are spread around these 2 levels, including a picture spot with a staff ready to take pictures of you with the Hogwarts house flags. There are also the various patronuses painted on the walls, which Nolan did not waste any time to take a picture in front. In the theatre I can tell they’ve tried to incorporate the different Harry Potter elements into the architecture as well. 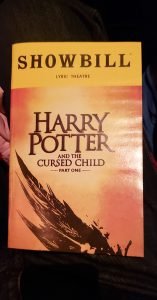 You can read more about what Nolan thought of the Harry Potter and the Cursed Child here. I generally had a really good time. The worry I had that I would not be able to follow along the play because of my limited exposure was not an issue, and the hours flew by quickly. In between the 2 acts we had to grab dinner quickly. We went back to Joey’s like we had planned. The wait was less than 15 minutes and we got a table on the outside. We had burgers and cheesecakes and of course most of our conversation was about what we just saw – Part 1 of the play. Check out this video for what the kids said. I am usually not someone who can sit through a 2.5-hour show easily, not to say this is double the length and we have an 8-year old in the party. But the show was so good and intriguing that both parts went by really quickly. At the end of this day, I am really glad everything lined up and we were able to catch the Harry Potter and the Cursed Child during our NYC trip. 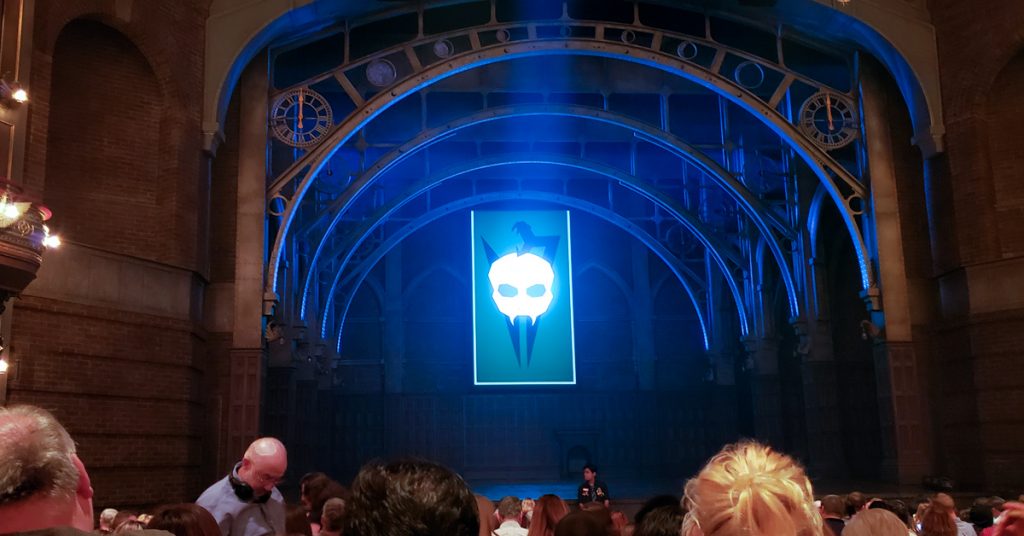