I wasn’t sure what to expect when Howard told me we are visiting a park built on a bunch of rail tracks and bridges. We found our way to the High Line walkway quite easily after we left Chelsea Market. The key is to find the exit on the north side of the Market. 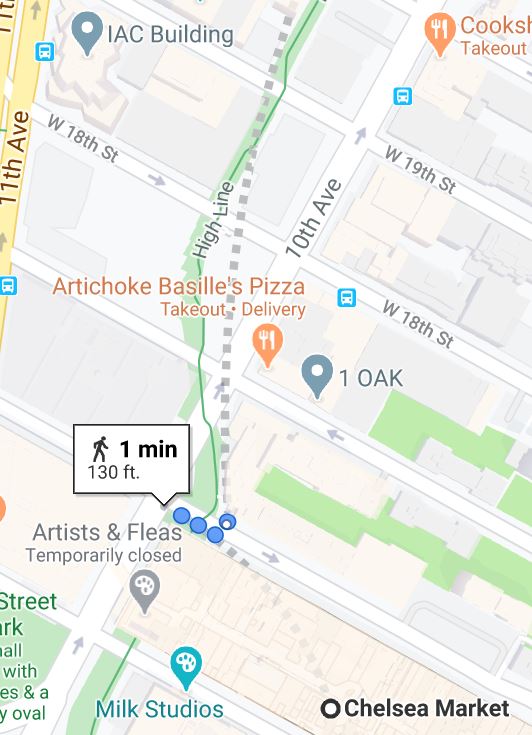 When we climbed up about three short flights of stairs we found tons of people on the High Line already. And only then did I start to appreciate this interesting urban design idea. Converting an old freight rail line into extra greenery and public space for a big city like Manhattan New York seems like a no brainer now. The High Line does not only give you a decent open view of the New York skyline, I also felt a sense of fresh air immediately as this pedestrian-only boulevard is elevated off the busy streets of Manhattan, away (albeit only slightly) from the traffic, vehicle exhaust, and the dust at the street level. The day has now warmed up very nicely, so we are all equipped with our sunglasses and hats, with Cady in her new pink sunshield. I was worried it’ll be too sunny and scorching hot the entire way, but fortunately we found many shady sections along the way. And every so often we came across spots featuring different arts and crafts. We liked the “Time to Organize” clock. Afterwards we found out the clock is based on an illustration originally produced for the Industrial Workers of the World (IWW) labor union by the North American writer and labor activist Ralph Chaplin that reads “What time is it? Time to organize!” There was also a picture spot where you can get a pretty nice view of the Empire State Building. But when we got there unfortunately it was completely in the shadow. When we looked onto the streets, I was surprised that the streets were not as busy as I expected. Perhaps traffic on the west side of Manhattan is generally not as bad? Cady even made a comment that there’s a lot of pollution in New York in general. But up on the High Line it is quite nice because there is a constant breeze that helps keep the temperature cool. We also saw one of the stacked mechanical parking lots along the way. We’ve only seen these on TV before but was not surprised to see one here in the Big Apple, which has some of the priciest real estate in the world.

Soon we picked up our speed and walked down the High Line as it is a very happening place. Several times we wanted to stop or slow down to take the views in, but as paths were not very wide at a number of spots we didn’t want to block the people behind us.

We ended walking at the Hudson Yards after taking the pathway to the very end on the north side.