Today’s the last day of our 7-day trip to New York!  We didn’t know what surprise still holds in our adventure for us? Let’s find out how Nolan and Cady did when we visited a second museum and Central park for the second time.

Delay in flight from JFK to home

I have certainly not be very consistent in doing my journals for this family trip to New York.  I figure I can catch up some right here, sitting at JFK waiting for our plane back home. Just moments before we were supposed to board the flight, there was an announcement for a delay. After a while they said the estimated delay will be an hour and five minutes. But I’m not holding my breath that that is how long it will be. With this delay it means that we will probably not get home now until past 2am. Unfortunately the kids will probably have to suffer a bit more as a result. But they’ve now been nothing but troopers in the last couple years when we travel on the road.

Back to earlier today, day 7 and last day of our family’s time in New York, without that much slotted in today’s itinerary, we woke up at a leisurely pace in the morning, packed and got everything ready.  We didn’t leave our hotel until after 10:30am. We took the subway to the Museum of Natural History station (but not going to AMNH again). Instead we walked over to Central Park. The plan was to spend some time at Central Park, but on foot this time. We want to visit places that we didn’t visit last time because we were rushing a little bit while cycling.

This time as soon as we walked into Central Park from the 81st subway station direction, we noticed there was a playground immediately to the left had side. Of course Nolan and Cady cheered and ran in. They entertained themselves for about 15-20 minutes in the playground before we moved on. As we were walking towards the center of the park, we noticed that there was a pretty long lineup and wondered what it was. We finally figured out people were lining up for the Shakespeare in the Park in Central Park. I can tell you the line up was not short at all and looped around a couple sections of the walk way. Well we weren’t really in the mood to catch a Shakespeare play and therefore it did not affect us at all. We walked on, looking for our first planned attraction being the Belvedere castle. It was a bit tricky to get there. We circled around a couple of times before finally finding the right path that leads up to the castle, only to see a sign that says it was under construction and therefore closed. We saw a glimpse of it and left for the next destination which was closer to the MOMA entrance – the Cleopatra’s Needle. Howard said it’s a 2000-year old obelisk that was a gift from Egypt, and we can certainly see the structure is a bit weathered already. It is really tall and we tried to take pictures with it from different angles, and discovered there was one side where you can have a clearer picture of the hieroglyphs.

Later on we just walked around Central Park exploring different pockets of the park.  We came across the lineup for the Shakespeare in the Park again, which was now even longer than before.  We moved on and walked towards the Great Lawn, while Cady was trying to get daddy to show her how to film using the Go Pro.  Strolling along at own pace in the Park on a nice day was a very enjoyable experience. 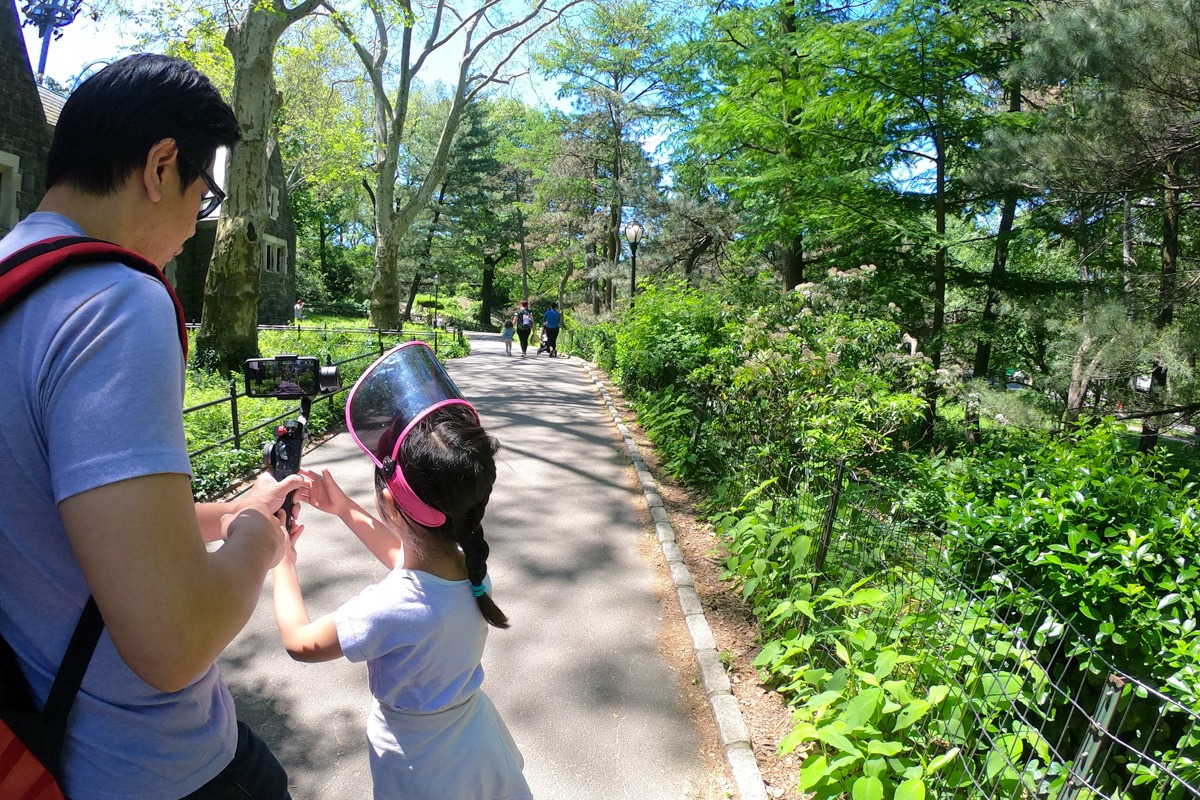 Soon it was almost lunchtime, and the kids were screaming hungry (not so much for Howard and me). I googled, for one last time, for a lunch option around that area. Listed as one of the must do’s in New York was New York bagels. Since we haven’t had the chance to eat one yet, we figured today’s the day to do it and went searching for one. We walked about 6 or 7 blocks to somewhere called Let’s Pick a Bagel. To be honest their regular bagel was pretty good and only cost $1.50. Cady tried their strawberry cream cheese which was a hefty $4.50 premium on top of the $1.50. Oh well, Cadence really enjoyed it even though mom thought it was a bit of rip off.

The Metropolitan Museum of Art (the Met)

We were still considering what we could do in the afternoon, before our flight in the late evening. We had dropped other museums from our itinerary by then because a couple days ago the kids did not enjoy the Museum of Natural History as much as we hoped. Would they really enjoy visiting other museums? But finally Howard and I decided that we just wanted to see the Met ourselves, so we back tracked a little bit to the Met, which was back at where Central Park was. The museum building itself was very impressive and so we did not miss the photo opportunity.

We got there before 2pm and there were 2 fairly long line ups for the security, one from the left and the other from the right. When we saw those line ups, we were hoping perhaps they were for tickets. If we bought tickets online then perhaps we could skip them? No, both sides of the lines were for security to go into the Museum. Fortunately the lines moved relatively quickly, I think we managed to get in only after lining up for 10 minutes. After we went in, we asked the lady at the information desk who told us that we can exchange the online tickets that we just bought at the kiosks ourselves. And when we were trying to do that at a kiosk I saw there were options to just buy the tickets there outright. So it looks like we could’ve purchased the tickets right then and there, and that would not have taken any extra time. There was no line up whatsoever to use any of those kiosks at that time. (That was not the case later on. About 1.5 hour later we were browsing through the museum and crossed back the main entrance lobby, and saw a pretty long line up to the ticket counter then.) After we got in to the museum we started with the Asian section. There were some interesting paintings along with copper sculptures from all the different dynasties and eras. There was also an exhibit, which may have been temporary, that was dedicated to Japanese pieces. Next we checked out the American section, as well as a musical instrument section.  In the American section we were delighted that Nolan recognized Emanuel Leutze’s Washington Crossing the Delaware. In the musical instrument section make sure to borrow the interactive audio guides from the staff to listen to the music made from a number of different instruments. It took us a little while but we finally found where the European section was. It exhibited a great number of paintings, including Monet. The Roman collection was really extraordinary and cool, filled with sculptures that made me think ancient Romans must have had very curly hair. And the Roman marble sarcophagus was just exquisite.

It didn’t take long for us to be extremely tired. I ended up looking for benches or corners where I could sit in every section that we visited.  Next, the Egyptian collection had some very interesting wall pictures, called reliefs. We were both amazed and impressed by how ancient Egyptians could build all these grand buildings and wall structures without the help of the sophisticated tools that we have today.

Even though the Egyptian collection was truly very interesting, my feet finally gave in and couldn’t take it anymore. I went and took a break at the café on the first floor with the kids. It was the right time to order some drinks and snacks for them anyway. Howard had planned all along to go visit the rooftop Café and so he took this opportunity to check that out by himself. The rooftop has some good views and is a great spot to take pictures. 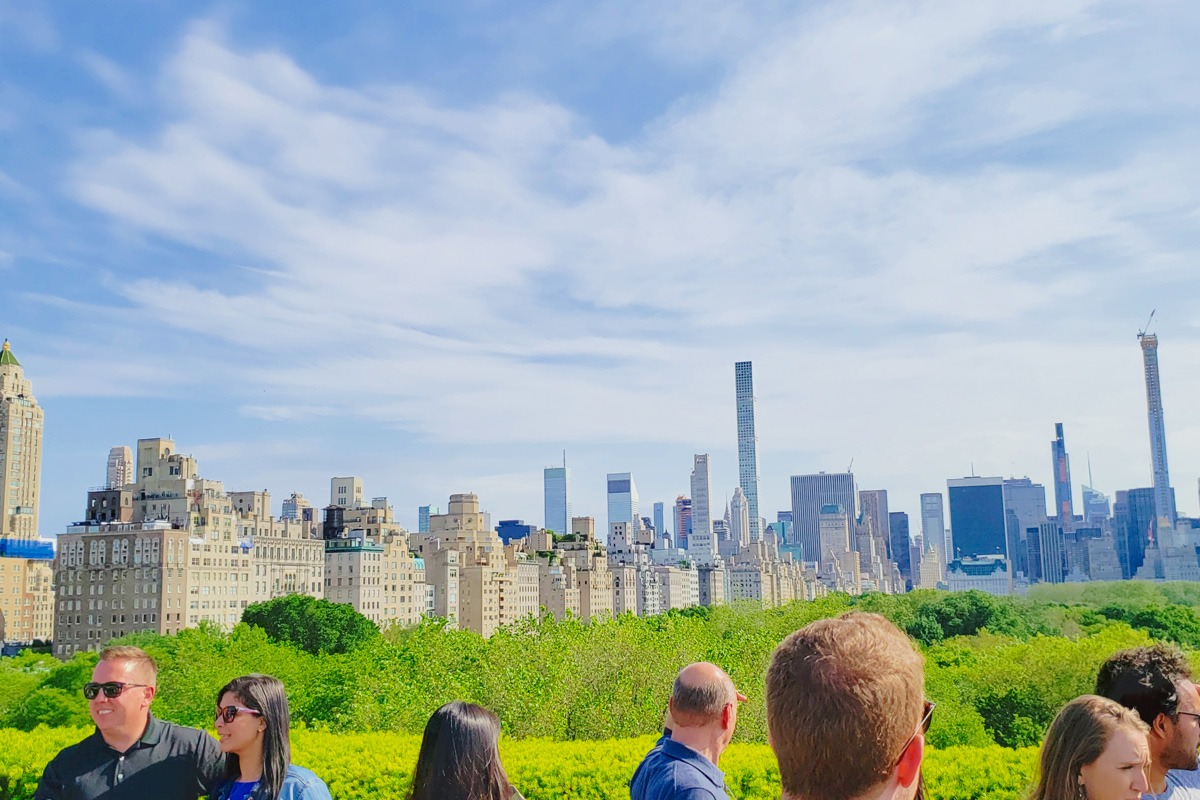 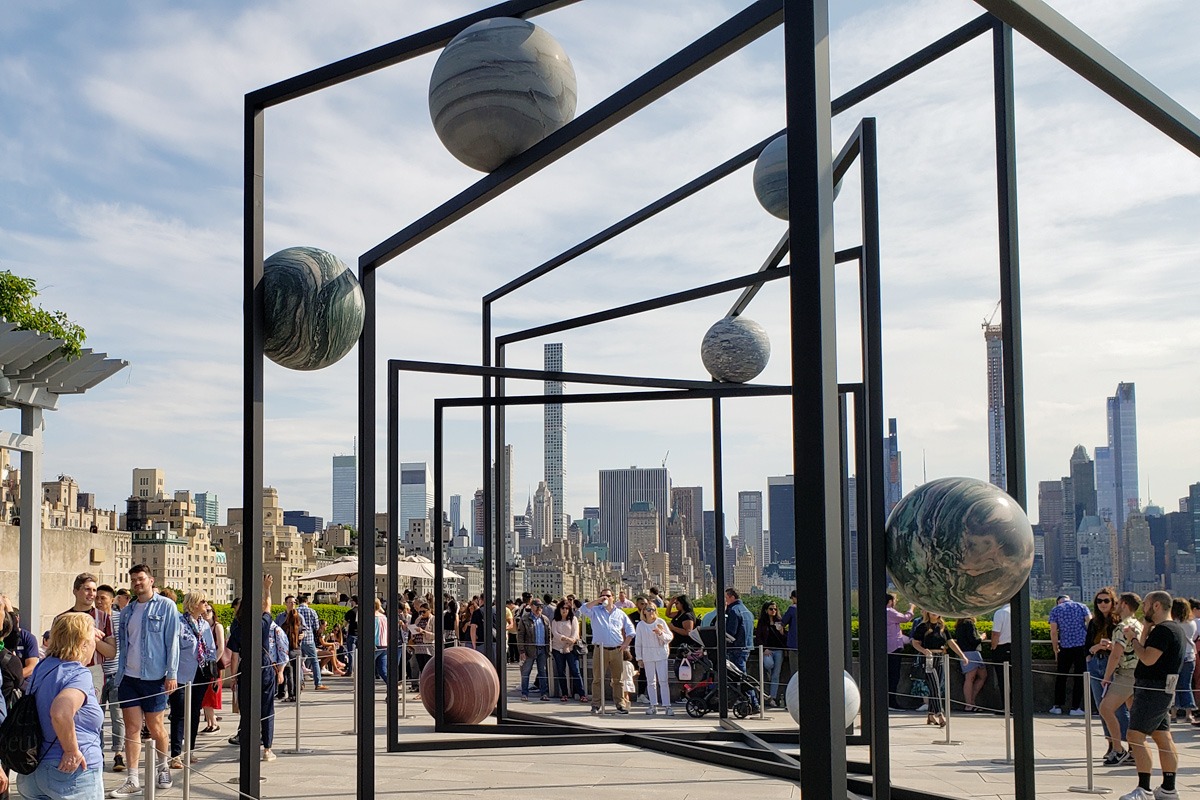 Taking the Air Train to JFK

After we left the Met Museum, we took the subway back to our hotel, and picked up the luggage that we left in storage earlier. The A-Train followed by the AirTrain took us to JFK. At the subway station we spent a bit time but finally figured out even though our metro cards were unlimited metro cards, we still needed to refill another five dollars at the ticket vending machine to continue the journey on the Air Train.

After that small hiccup it was a smooth ride to get to Terminal 8 at the New York airport. We got our boarding passes, and were delighted to confirm that we were “TSA pre-checked”. We thought it must be our lucky day as the TSA pre-check line was super short compared to the regular line, and we even had a very nice TSA lady who joked with us when she was checking our passports. I must say she was one of the first US Customs Officers I’ve met who took the time to make jokes with the kids. With the time we saved from the TSA pre-check, we had plenty to time to grab some dinner from one of the airport restaurants. You already know by now that our good fortune only lasted us until we made it to gate 6. As we got to the gate I was still thinking we got the timing down quite well as it was just the right time to board. As of this minute (while writing this journal) there’s no new update to the flight delay and I can only assume it will be at least an hour. Guess we will just have to wait patiently and go with the flow. Trust me to try to make this wait time a productive time as well!  Hopefully the one-hour delay would be it and the rest of the journey back home will be smooth with no more hiccups, concluding a super fun and busy 7-day, 6-night family trip to New York City in May 2019.