On the Thursday of our New York trip the forecast was calling for some thunderstorm and rain, therefore we had always planned such a day to be an inside day – perfect to spend at a museum. As usual we had the good intention of arriving at the American Museum of Natural History (AMNH) by 10 o’clock that morning- its opening time. Of course as usual we didn’t get there until closer to 10:30am. So my previously planned out schedule including the line up of the special exhibit times wasn’t going to work.

When we got out of the subway train station, there was a food truck right there where I asked for directions. The guy was quite nice and pointed to the right hand side as the main entrance and to the left-hand side which was a second entrance on 81st street. I asked him which entrance has a shorter line, he said of course the second entrance. We took that advice, went left and found there was pretty much no one at the ticket line. A note though that there is a separate window for will-call, but it was not manned when we were there and therefore we still had to go to the regular ticket line to pick up the tickets anyway.

We walked up to the ticket counter, exchanged the tickets that I literally just bought online, which included admission to all of the special exhibits. The special exhibits here require a timed entry that’s booked in advance. And the lady asked whether we want her to line up the time for all the special exhibits in the “most logical manner” for us and I said “yes please.” So our first show was the 11am Dark Space universe show which was not far from the entrance that we got in. We hung around the Heilbrunn Cosmic Pathway area which also featured a lot of space related artifacts and materials, which we always find interesting.

However, that seems to be the same area that many small children school tours like to congregate, and there were quite a few that day. In fact, in the afternoon we ran into many more older kids school groups so perhaps this museum is filled with school groups every day. Anyway we felt we were almost swamped by little kids, first thing in the morning before the caffeine really kicked in. The number of children running around us was actually a little bit frightening.

We decided to walk away from the crowd and lined up for our show early just to escape from that madness. After we watched the universe show we proceeded to see the rest of the museum and shows. But fortunately, or not so fortunately, the ticket lady actually lined up all of our shows quite packed. It was almost one show after another, and because we didn’t want to miss any of these we ended up feeling rushed going from one exhibit to the next. We have to also factor in the time for us to figure out where is the location of the next exhibit in the museum (remember it’s large). And because the schedule didn’t allow for enough time to just roam around the area of wherever we were, we find ourselves backtracking between different parts of the museum. This is mostly our own fault due to lack of planning (or not showing up early enough to stick to my original plan).

The AMNH was huge and quite quickly it didn’t take long for the kids to start to get bored. The different shows were not bad, and not all of the special exhibits are actually shows. Sometimes they were just a more in-depth exhibit or display of a certain subject, like the T. Rex: the Ultimate Predator.

In the T. Rex exhibit we saw how a newborn T. Rex can look quite innocent, and grew to be a gigantic grown up T. Rex in a matter of only 20 years. There is a VR section there as well that Nolan tried, but I don’t think he did very well nor did he enjoyed it. 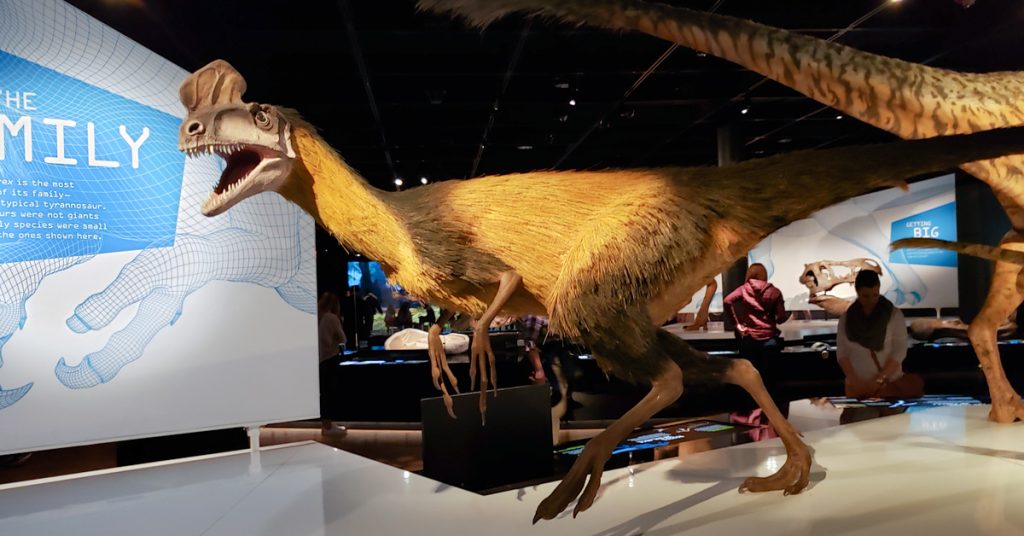 Another exhibit was the Unseen Ocean exhibit that has a lot of information about the unseen parts of the ocean. I think a main theme at AMNH must be around Deepwater, as I see quite a few different sections or displays about the unchartered areas of the sea. I do find the topic very interesting as human still knows very little about it. In this section there’s a replica of a Triton submersible that the kids can hop on to explore around the unchartered territory. This is one of the more kid-friendly features that Nolan and Cady did a couple of times.

We also saw the Butterfly Conservatory exhibit. I really liked it and loved how live butterflies fly right up to you, nice and close. Quite a few of the butterflies are really big in size and they are just flying in all directions around you.

We made our way to the fourth floor, which seems to be mostly dedicated to fossils. The amount of different fossil bones they collected and display is amazing, but I personally also think it got to be a little bit repetitive in the end for the same reason. I do really like the American section where they have life-size models of animals. We were told that the skin on these animals were all real furs and skins. For me this is a rare treat and I kept thinking a lot of them are really, really pretty. It reminded me of our wish to go see many of these animals in the wild one day. A good number of these animals live in the Africa Safari region. An African Safari trip is definitely in our bucket list, but maybe meant for many years from now.

The American Museum of Natural History is really big. Several hours later I don’t remember all the different sections that we visited already. For the kids, today ended up being another day where the they lost interest faster than we would like. Based on this Howard and I commented that perhaps the kids are not ready for a cultural trip to Europe quite yet. We are waiting for the right time to do such a trip, where we will visit again a lot of the great museums that Howard and I went to a number of years ago.