Melbourne was easily our favorite city in Australia. I think the best way to describe Melbourne is that it has a bit of everything. With the many open air cafes, there’s an element of Europe to parts of the city; but at the same time there are multi-cultural pockets throughout the city to satisfy any needs for a particular region. And depending on which direction you drove, the day trips we took led us from beautiful beaches to rolling hills and valleys.

Our day started with the most important meal of the day … coffee.  Just kidding, breakfast (with coffee, of course!)  I had heard from my Aussie friends how good the coffee was in Melbourne in particular, and my addition was excited by the fact that we were finally here.  After some research, we decided to venture to Operator 25, a brunch venue that converted from a heritage telephone operator building (just imagine those telephone switchboards from the 1920s!). Located near Flagstaff Garden, the entrance is on Will St. a bit of – until I saw the crowds coming in and out of the cafe.   Despite the crowds, the wait for a table was less than 10 minutes.  And those 10 minutes were easily worth the wait.  Brunch here was awesome.   We had waffles topped with fruit green tea and blueberry ice cream… and it was so, so, good.   This was not your neighbourhood Denny’s waffles … it was closer to dessert at a fancy restaurant, without the fancy decor.  And the coffee (it was a warm day, so we elected for iced lattes) provided a much needed espresso kick to keep us going on our 3rd travel week.
Previous
Next After we were satisfied by the brunch, we proceeded to spend an hour just walking around Melbourne streets, checking out the storefronts and admiring the street art in the various alleyways along the way.

Melbourne’s Blender’s Lane is famous for its street art; we never made it to the famous part of the lane, but still found lots of beautiful (and luckily kid-friendly) street art to admire along the way to our next major destination, The National Gallery of Victoria (NGV).

And the NGV was great. To be honest, I had only planned a couple of hours max to spend at the gallery, expecting the kids not to last much even within that time frame at an art museum. But we ended up skipping the latter parts of our itinerary and staying a full half day. We happened to be there as part of its tri-annual celebration, which meant entrance was free (whoohoo!) . And we enjoyed every single level of this wonderful museum – there was something for everyone! On the main floor was a number of special exhibits, including a rose-themed exhibit which made for very interesting photos. The floor also has a children’s gallery, which we happily let the kids roam a bit more free and interact with the exhibits.

The next two levels consisted of a variety of genres – from classic Medieval art to modern pieces. My favourite was a gallery of stunning couture dresses from Chinese designer Guo Pei. Anna reminisced of our travels in Europe was we walked through the European galleries, while Nolan was fascinated by both the ancient Egyptian collection and modern art pieces. This place had something literally for everyone. We ended up staying until closing, skipping the original plan to explore the Botanical gardens nearby.

The next day, we took a day trip through the Yarra Valley region.  About an hour’s drive to the west of the city, the valley is famous for it’s many wineries and dairy farms. With kids, we elected to bypass the wineries but rather explored a more eclectic selection of destinations.    We started with a short walk around the Dandenong Ranges Botanical Garden, which gave us a nice stroll through a variety of flower gardens and sun shading trees to stretch our legs from the car ride.   But our next stop was the destination I was looking forward to the most – the William Ricketts Sanctuary.   This park was formerly the home of a sculptor of the same name, who spent decades creating aboriginal-inspired sculptures which were integrated into the natural environment, and the result was fascinating.  Walking through the many paths of the sanctuary and exploring the faces seemingly carved into trees, and rocks, I felt like I had wandered into a scene from the Neverending Story.  It was strange, beautiful, and calming all at the same time, and a photographer’s dream.
Previous
Next
After taking photos and admiring the fantastical sculptures of the sanctuary, it was time to cater to the kids.  A 15 minute drives through the winding roads of the ranges took us to the suburb of Montrose, where we picked up some lunch from the Montrose Fish & Chipperie before heading down the street to eat at the Montrose Community Playground, where we had a quick picnic and let the kids burn off some pent up energy.   Our next destination was the Yarra Valley Dairy Farm, where they have been making soft cheeses (including an amazing Feta) for over 100 years!  So good. After stocking up, we proceeded to the destination the kids were looking forward to the most – the Yarra Valley Chocolatier and Ice Cremery (need I say more?).   This place is the Australian equivalent of Charlie’s Chocolate Factory… it was filled with kids!!  Actually, this place was a wonderful spot for a sunny afternoon in the valley.  Of course, the kids had their fill of chocolate ice cream, while the adults (again) refueled on caffeine.  There was a nice covered patio outside overlooking their beautiful orchards, and a small play area with some kick balls for younger kids.

As we were on vacation, I had forgotten about Easter, and we missed an Easter egg hunt by a day (although I could only imagine the madness of hundreds of kids scrambling for eggs), but the family enjoyed a bit of a break coloring together an Easter-themed coloring page. Besides ice cream, the variety of chocolate was quite good, so we stocked up on some gift packs to bring home to family and friends, while the kids played kickball in a small outdoor play area. By the time we were ready to go, it was late afternoon, and so headed back to Melbourne to beat the urban commute back into the city.

The next day we took another day trip, this time south towards the Mornington Peninsula.   The drive was a completely different feel than the day before.  While driving through the Dandenong Ranges and the Valley primarily consisted of driving through tight windy roads between lush greens of more forested areas, the drive to Mornington had a very Southern California feel to it – wide multi-lane highway between wide expanses of land.   Our first stop was Mother’s Beach, about an hour south of Melbourne.  With easy parking, calm waters, and good facilities, this beach is a great beach for families with younger kids (perhaps that’s how the beach got it’s name?).    Along the back of the beach was a row a colorful collection of beach boxes, little sheds for the locals to store their gear, and made for some nice backdrops for photographs which we took full advantage of.S 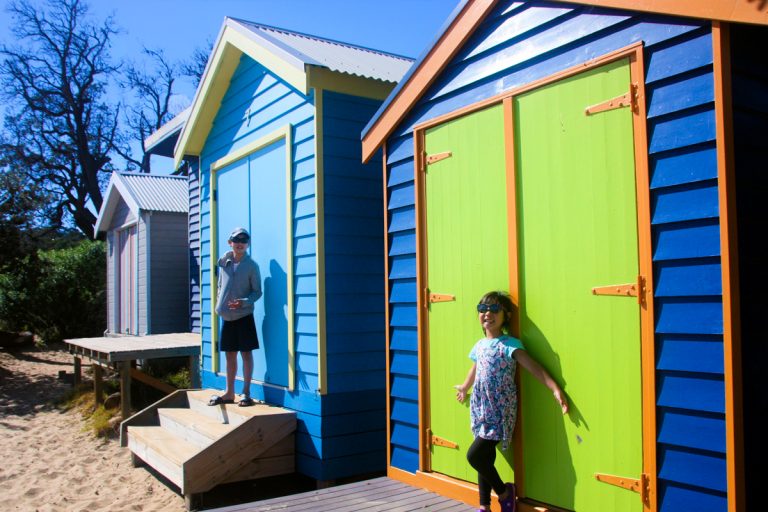 After the kids had their share of fun playing on the beach, we made a quick stop at Johnny Ripe, a small bakery famous for their meat pies.  We ordered some pies and lattes to go, and headed to our planned picnic location, Arthur’s Seat Lookout.  Arthur’s Seat is a lookout about 1000 ft above sea level, with an amazing 180 view of the beach below and the vast ocean front.  We found a spot with a view to park our car, and soaked in the stunning sight while we enjoyed the meat pies. After we had our fill of the pies and the views, we turned our car around to head to the the park at the top of the hill, but parking was nowhere to be found.   We then decided to head to our next destination, Cape Schanck Lighthouse.  However, within 2 minutes of heading downhill, we saw a sign that resulted in a change of plans – an arrow with the words “Enchanted Adventure Gardens“. A quick google search gave us a synopsis of the attraction, and looking at the drive to the lighthouse, we decided it was a good idea to cater the rest of the day for the kids.  So we followed the signs, found parking, and queued to buy tickets into the park.   There were effectively four main activities in the park – ziplining, canopy walks, hedge mazes, and tube slides.  Zip-lining was extra, and didn’t look that exciting given the geography, so we elected for the general admission to do the latter three activities.  The canopy walk is best for little kids, as it doesn’t go as high as other ones we’ve been to, but the kids seemed like enough to quickly run through the course twice.  We then proceeded to do the hedge maze, which, despite having what seemed to be hundreds of other families in the maze with us, took surprisingly long to get out.  Normally the challenge with mazes is that there are so many people that you are forced to go in a single direction and herded out the exit.  It wasn’t the case with this maze, and with the kids leading the pack, there was sufficient loss of direction to make it somewhat of a puzzle. After visiting some of the smaller adjacent gardens, the rest of the afternoon was dedicated to tube sliding, which turned out to be a good afternoon of exercising for me.  The kids went down the tubes, then my job was to lug the tubes back up to the top of the hills.  Now I’m pretty use this line of work when tube sliding in the snow, but pulling tubes over tarps on grass results in a lot more friction than snow, so it turned out a bit of a workout, especially under a fairly hot sun.  Oh well, the joys of fatherhood. By around 5:00pm it was time to head back to Melbourne.  By our 3rd week of the trip, the family was starting to crave some chinese food, so once we got to town we hit a place called Kitchen Republik.  At first sight, it seemed to a food court, with different food stalls, but once you sit down and are handed a menu, you soon realize it’s more of a facade as there is a single menu to order from any of the “restaurants” in the location.  We saw the kids’s favourite dish of all time, Taiwanese braised beef on rice (“lu rou fan”) and had to order that for them.  We tried a lot of different food throughout our trip, but don’t believe I’ve ever seen the kids eat so excited to see food than when the rice arrived.  We are truly Chinese. And that wrapped up our Australia adventures.  Next stop – Singapore!