This is day 6 of our NYC trip already. We had set it aside for a full day of Brooklyn, but looking back we ended up achieving much more than that in a single day. We left our hotel in the morning at about 10:30am, headed for Brooklyn. But Howard actually started today much much earlier than that.

Howard had woken up at 4:30am by himself to go see the sunrise at Brooklyn Bridge. Whether he asked us to join him and we politely declined, or he knew and didn’t bother to ask, I don’t quite remember now. But I admire him for doing this and he took some beautiful pictures to prove that he did do this. Some of the pictures were of course selfies as there was none of us to take pictures for him.

After he returned to the hotel, I got him to go back to sleep for about 30 minutes before he was completely woken up by the kids. Soon after the four of us left the hotel and boarded the east bound subway for the first time – to the Brooklyn direction. Our hotel was close to the financial district so it was actually quite close. The subway ride didn’t take long at all.

The area we got off is called Dumbo. As we exited out of the subway station, I commented that there is this spot that I have read about online, where tourists and bloggers go to take a picture of the Empire State building. And guess what, that’s exactly where Howard was bringing us. It was pretty easy to know that we’ve got to the right place because there were quite a few others doing exactly the same thing. When we arrived there were tripods and other camera equipment already set up.

The location is really a narrow picture spot between two buildings. With you eyes you can easily see a pretty gorgeous view of the Brooklyn Bridge, and you can also see through a gap some Manhattan buildings including the Empire State building. But it’s not that easy to capture those buildings in a camera shot. To prove to you we did see it here’s a picture. 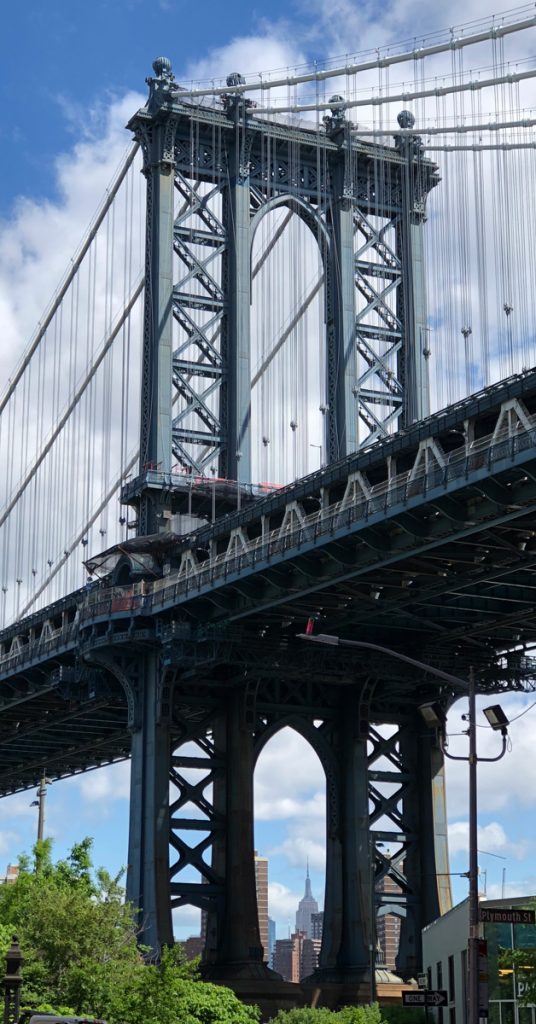 What’s interesting is this spot is really in the middle of a road with car traffic. But it certainly looks like nobody cares about being run over by the cars. Occasionally we jumped out of the way to make sure we’re not blocking any car coming down the road. But in the 20 minutes that we were there, we saw ballerinas, sorry, I should say a team of ballerinas doing splits in the middle of the road. We also saw a lady dressed in really bright orange trying to do a photo shoot. When a truck showed up, she didn’t care and definitely didn’t step away until she was completely done with her photo shot. We took a whole bunch of shots ourselves, and agreed it was a pretty good picture spot. Next we headed to a bakery that was pretty famous – One Girl Cookies, where Cady ordered a chocolate cupcake, and Nolan and I had the whoopie cream pies. I thought the cream pie was decent but was unfortunately nothing amazing. Howard and I also got lattes to catch up on our caffeine intake, so we all took a quick break even though it was probably only an hour after we had breakfast.

Jane’s Carousel was not expensive at $2 per ride, but even for 7-year old Cady she took one ride and said it was enough for her. So the carousel is obviously more suitable for younger kids.

Next we started the walk from Pier 1 towards the south. Along the way we found the design of the piers to be very interesting. Each pier will have a different theme and function to it. One of the piers was a basketball court; another one was a roller skating rink. Pier 6 even has a sand volleyball court and I did see a few people there playing volleyball in the middle of the day. We were also searching for the playground at Pier 6 which was supposed to be a bit bigger than the kiddie playground that we saw earlier, but unfortunately after we found it Nolan and Cady still found it to be only so-so.

Next we walked back to Pier one to find some lunch. On our way in we already saw this place with lobster roll – Lukes Lobster, and we knew we wanted to give that a try. When we went by at first around 12 o’clock there was no lineup so I didn’t think it would be busy at all. We were wrong and by the time we went back at about 2pm there was a huge lineup. How come everyone was taking a late lunch like us?!?!? It probably took me 20 minutes just to lineup to pay and another 10 minutes or so to actually get the lobster roll. I brought that into the Shake Shack (ssshh!) that was just right around the corner, to join the kids who hung out and ordered their own food already while I was lining up outside.

After this quick meal we knew there wasn’t enough for us to spend more time in Brooklyn.  We had been told by a couple different people that we could spend an entire day at Brooklyn but unfortunately it wasn’t quite so for us.  That’s ok as we can always adjust our plan.

We went back onto the subway and went to the Rockefellar Center. As soon as we got into town, we went to the Top of the Rock ticket office first, exchanged the tickets we bought for a timed entry later that evening.  Originally we were thinking of getting the timed entry for 7:40pm, timing it for the sunset that was supposed to be 8:15pm. But after asking the cashier we’re not sure how long the security line to go into the building would be. Once we pick a timed entry you cannot show up before that time at all. With that consideration, we decided to change those tickets to 7:15pm instead, which turned out to be a very good move.

After we got the timed entry tickets, we went away to find some other stuff to do.  We first hit the FAO Schwartz Toy Company, but of course didn’t miss the Lego store or the Nintendo store. At Nintendo the two of them managed to kill quite a bit of time standing there playing on the machines. I was just happy to find a spot somewhere along the window sill and rested my very tired feet.

In between these outlets we found a few minutes to try out the banana pudding from Magnolia Bakery. Honestly speaking it was too sweet to my liking but it didn’t stop Cady from enjoying it.

Top of the Rock

We grabbed a super quick dinner from one of the delis around that area, then made sure we were back and ready to go at the Top of the Rock lineup for 7:15pm. I think there are tons of people with the same mindset as us, and tickets sold for this time of the day were for five-minute increments.  When we got to the line up, they were calling 7:10pm people, so we waited no more than five minutes before they started calling in 7:15pm tickets!

When they call out the time on your tickets, you can just walk to the front of the line and enter. After we got in, we found out we were joined by a group of other people coming up from the elevator. The 2 groups merged before lining up for the security line, where they ask you to put your cell phones and cameras into your backpacks for x-ray screening. It was a bit of a mad scramble to get through the lines. Then they make you watch a short video in a staging area, then divided everyone into different sections to lineup for the few elevators. The elevator was express, and shot to the 76th floor in a very short amount of time.

After we got up we decided to go straight to the very top – 79th floor, to watch the view from there. Overall, I think the Top of the Rock was worth it, even knowing it is a tourist trap. We had decided to do this instead of the Empire State building. Partially because we heard the Empire State building has even longer lineups, which we don’t really fancy doing more than what’s necessary.

The view from the Top of the Rock was honestly really nice. On one side we were able to see the Central Park very clearly, and on the other side we saw lots of skyscrapers including the famous and very recognizable Empire State Building.

We were really glad we got in just before the sunset when it was still clear sky.  So we hurried to take as many pictures as we could before the sun set.  After taking pictures on the 80th floor and the 79th floor, we took the escalator back down to 77th floor on the inside and searched for a window that over-looked the Empire State building. Like some of the other folks we saw there, we “claimed” a window and set up shop there.

We waited for the next 30 minutes for the sky to turn dark to take night time pictures. Technically there are no tripods allowed.  So Howard and Nolan’s attempt at taking a time lapse on the Go Pro wasn’t going to work.  But since I was just sitting there on the window sill I decided to offer my knee as the tripod and held onto the Go Pro for the next hour. I am surprised at my own perseverance but recorded the view of the Empire State building going from dusk to sunset.

Our research said that the Empire State Building will change to red, white and blue colors, in honor of the Memorial Day weekend occasion, and should change colors on the hour, and it did.  The three colors on the building were indeed pretty. At 9 o’clock the Empire State building changed into a golden color, then changed back to the red, white and blue again about five minutes later. By that time the lineup going down the elevator was quite long as everyone was leaving. It took another 20 minutes for us to get down to the main street level. We took the subway back to the hotel and called it a night after another very long and busy day in NYC.

I’ll leave you with this new pose that Cady came up with today that became her favorite pose.

Written by Anna, sitting at gate 6 @ JFK waiting to board our plane going home, might as well try to catch up on a number of journals that I missed over the last few days.

Tags: Top of the Rock